About us Our History


Manufacturing of quality medical hand instruments for half a century 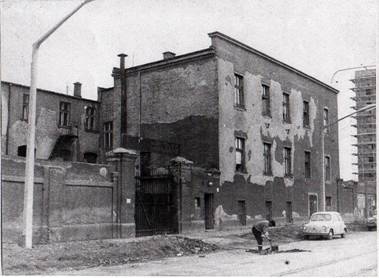 The city of Debrecen has always had traditions in the manufacturing of medical instruments; initially, they were associated with the medical technicians working under handicraft circumstances. In response to the industrial objectives set for our developing country at that time, these craftsmen were combined to launch the operation of the Medical Instrument Factory of Debrecen on 1 July 1950, at the business site of the Iron and Copper Furniture Factor at in Ispotály Street.
The aim of the foundation of such a company was to create a Debrecen-based instrument-manufacturing facility that in addition to supplying the domestic market would have potentials for successful export activities, as well. At that time, only 9 skilled workers were available; their knowledge and expertise had formerly been dedicated to the satisfaction of the associated demands of the local Clinics. In order to start up the manufacturing of even the simplest medical hand instruments, an urgent task was the expansion of the headcount of skilled workers. The management of the factory gradually set up the necessary organizational units one after the other, whereas the superiors were selected from the suitable employees. The continuous education and training of skilled works allowed the commencement of the manufacturing of surgical needles and injection needles besides the pincers, scissors, dental pliers. This range of products can still be regarded as the conventional products of the Medical Instrument Factory of Debrecen. 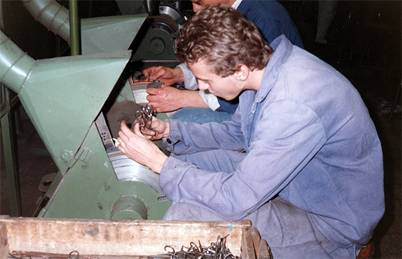 In 1964, the company became a member of MEDICOR Works having nationwide significance, and from the dame year production was relocated to a new factory building to support the introduction of new products and further exploitation of market opportunities.

The manufacturing orientations of the company were also defined:

MEDICOR Works relied on a uniform concept of efficient technical development and market policy to achieve dynamic growth, and soon it became the dominant actor of the domestic medical engineering industry and an important international factor abroad.
The company was capable to driving an own development of medical engineering devices.

In its specialized field, as early as in  the 1980s the company belonged to the 15 largest exporters of the global market, its products were used in 70 countries of five continents, it operated commercial and service offices in more than 15 countries alongside own subsidiaries and enterprises of mixed ownership.

In 1972, MEDICOR Works acquired TIM, a medical hand instrument trading company based in Germany to forge a partnership, and with this move continuous exports to Western Europe came under way.

In the meantime, the headcount of the company grew from the initial 9 employees to 2,300.

In 1988, MEDICOR Works joint quality development activities, and as one of the pioneering four companies in Debrecen it introduced Total Quality Management (TQM),
In February 1988, the Debrecen-based company founded MEDICOR Medical Precision Engineering Ltd., which was then operated as a legally and financially independent entity. As a consequence, MEDICOR still relying on its own extensive experience in the field of manufacturing medical instruments became renewed, where with the change of the economic system new forces of development were given leading roles and opportunities.

January 1991 saw the foundation of MEDICOR Medical Hand Instrument Manufacturing and Trading Ltd. Even in that early period, the management was following the concept to standardize the quality of its products independently from the market, and therefore in the course of operations the highest possible quality standards should be targeted.
The company purchases the semi-manufactures needed for the production activities, or if it is not possible, the base materials required for the preparation of semi-manufactures from Germany. In this manner, the quality of the products is guaranteed in terms of both material quality and shape. Other factors of product quality include corrosion resistance, which is dependent on the quality of the surface and its status of heat treatment. Surface smoothness is ensured by the operations run by the given technologies, such as electropolishing, grinding, polishing or matting, while the homogeneous texture is given by protective gas heat treatment. As required by the international standards, corrosion resistance is examined on each article. Finished products are separately tested for the uniformity of size, shape, operation and the product itself, as well as corrosion resistance by the quality control organization acting independently from production.

MEDICOR Hand Instrument Ltd. was formed by means of restructuring on 31 May 1998. The legal predecessor of the company was Medical Hand Instrument Manufacturing and Trading Ltd. founded back in 1991 from MEDICOR Medical Precision Engineering Ltd..
Towards the accomplishment of long-term objectives, in 2005 the company established the Romanian Meder S.R.L. and Medimar S.R.L. subsidiaries in Valea lui Mihai and Margita, respectively in order to exploit the opportunities in inexpensive labour.

The company’s headquarters, as well as two finishing plants alongside the service machining, heat treatment, tool manufacturing and maintenance workshops were still in Debrecen, while another finishing plan was operated in Egyek. The headcount of the company was 650 at that time.

In 1999, MEDICOR Hand Instrument Ltd. founded a 100% own subsidiary under the name of Pályi Medical Instrument Manufacturing Ltd. and with 45 employees in order to utilize its business site in Hosszupályi.
In 2000, the company acquired an 80% business share in its German trading partner company, Tuttliger Instrumenten Manufactur Gmbh (TIM).

Within the meaning of Directive 93/42 EEC, since June 1998 only products affixed with “CE” markings could be delivered to the countries of the European Union. The products of the company belonged to Class I, which meant that after the elaboration of the appropriate technical documentation and the conclusion of a contract of representation with a partner that had a business site within the European Community, and with the availability of the manufacturer’s declaration the “CE” marking could be affixed to our products.
With its products, in 1994 the company applied for the Excellent Hungarian Product prize. On the basis of the tests and examinations performed, all our products were found to be eligible to use this emblem.

For the domestic distribution of medical hand instruments, the approval of the Institute of National Hospital and Medical Engineering (ORKI) was needed. After the establishment of independent hand instrument manufacturing operations, in 1994 the company had its products tested, and on the basis of the examinations all the articles of the manufactured product range were granted the necessary marketing licenses. 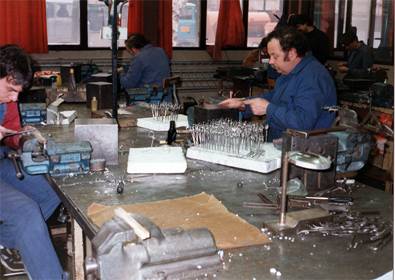 At the present, the Company’s current range of products consists of more than 10,000 own products, which fully embrace and satisfy the demands of modern human and veterinary medicine, and furthermore there are nearly 3,500 other products tailor-made for special customer requirements.

Production is performed in series of various volumes: even from demands for 1–2 pieces per type to monthly orders of 6–8 thousand articles. Therefore, we satisfy the unique demands of hospitals and private practitioners for smaller numbers of broad-ranging articles, and at the same time deliver tens of thousands of products to wholesalers.
Our current headcount: 208 employees.


95% of our sales revenues are realized on export. These markets call for product selections determined by the customer themselves, yet reflecting the general needs on the given markets – demands that are to be satisfied towards making efficient market entrance. On the other hand, the company has become the market-leading supplier in Hungary, as well, today its market share is over 60%.